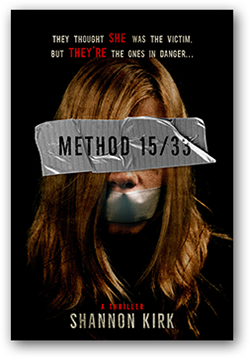 Titled The Method in the UK

Imagine a helpless, pregnant 16-year-old who's just been yanked from the serenity of her home and shoved in a dirty van. Kidnapped. Alone. Terrified.

Picture instead a pregnant, 16-year-old, manipulative prodigy. She is shoved in a dirty van and, from the first moment of her kidnapping, feels a calm desire for two things: to save her unborn son and to exact merciless revenge.

She is methodical. She is calculating, scientific in her plotting. She might be a clinical sociopath. Method 15/33 is what happens when the victim is just as cold as the captors.

Before being published by Oceanview Publishing as a full-length novel, Method 15/33 was a finalist in the 2013 William Faulkner-William Wisdom Creative Writing Competition as novella 15/33.

Listen to Shannon's interview with Stephen Campbell at CrimeFiction.FM 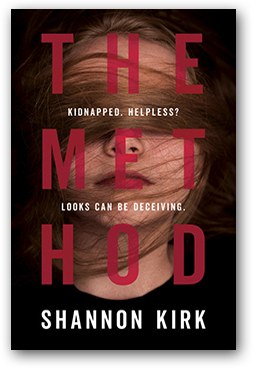 "Deft...refreshing...Shannon Kirk...is a writer to watch."
—Stylist listing The Method as one of the 8 best thrillers to bring to the beach (read the full review)

Method 15/33 is a "riveting debut novel...Readers will see parallels between [the main character] and Lisbeth Salander from The Girl with the Dragon Tattoo, both victims who refuse to be victimized...The question is how [she will survive], and watching the answer unfold is like watching a wondrously complicated, well-oiled Rube Goldberg contraption in action. Welcome to a thrilling new voice in crime fiction."
—The Boston Globe (read the full review)

"Kirk's brilliantly executed novel alternates between the kidnapped girl and Special Agent Roger Liu—.....(The girl's) brilliance is exceeded only by her ability to plan, calculate, observe, and wait. The abductors never have a chance as she orchestrates a conclusion that will leave readers satisfied and possibly unsettled. Readers wait with her as she ponders the right moment to make a move even as they suspect that it might not work. VERDICT Give this to teens who read Stephen King and other psychological thrillers, especially those with a penchant for dark and violent suspense.
—School Library Journal (starred review and listed as one of top adult books of 2015 for teens) (read the full review)

"In Kirk's flat-out brilliant thriller, the girl's vengeful voice is leavened in alternate chapters by the warmer voice of Roger Liu, the FBI agent determine to save her...In the book's eye-popping climax, we learn exactly how lethal...everyday items can be. Believe me, you'll never look at a cup of water in the same way again...Method 15/33 takes us to some very dark places, and at times, we can't help but wonder whose soul is the darker—the captor's or the captive's. But stick around. In the book's last chapter, the darkness lifts and a light illuminates everything, both past and present. Then you'll reread the book to see what else you got wrong."
—Betty Webb, Mystery Scene Magazine

"Shannon Kirk's brilliant Method 15/33...delivers, big-time...Kirk's choice of [this] protagonist for this crime thriller is utter gold. This novel presents a situation...that could have been another girl-in-trouble novel in the hands of a less skilled writer, but never goes there...Written in first-person point of view, Method 15/33 is intense, character-driven, thoughtful, and emotionally satisfying...There's also room at the novel's end for more forays into Lisa's post-kidnapping world. Should Kirk decide to do a follow-up novel, or even start a short series, such a move would be a welcome event. Method 15/33 is a solid winner."
—Forword Reviews, J.G. Stinson (read the full review)

"In Kirk's harrowing first novel, a kidnap victim['s]... willpower and ingenuity prove more than a match for the callous brutality of those who wish her ill as this exciting tale builds to a surprising climax."
—Publishers Weekly (starred review)

"Nietzsche warned us to beware of people with a strong desire to punish. That thought lingers after putting down this dark, disturbing, damnably readable novel...a worthy challenge, a joy to discuss, and a great pairing with John Katzenback's equally riveting What Comes Next (2012)."
—Booklist (starred review)

"What happens when infant traffickers kidnap the wrong pregnant teen? You get Method 15/33, a cross between The Lovely Bones and Silence of the Lambs. Shannon Kirk's debut thriller is a dark, literate page turner, utterly compelling. I read it in one sitting."
—Leonard Rosen, Award-winning author of All Cry Chaos and The Tenth Witness

"Completely original and totally kick ass! Shannon Kirk pulls no punches in this adrenaline rush of a thriller where the victim is the one to watch, while the kidnappers learn to fear. Loved it!"
—Lisa Gardner, New York Times Bestselling Author of multiple books

"Method 15/33 is crowded with fascinating characters—even the spear carriers pop off the page—but the standout is the kidnapped pregnant teenager. Her captors want her baby. Little do they know they've brought an insanely brilliant, angry, vengeful, borderline sociopath under their roof. Somebody's in big trouble... and it isn't the teenager."
—F. Paul Wilson, New York Times Bestselling Author of multiple books

"Method 15/33 is one of the year's best thrillers."
—Stephen Campbell, CrimeFiction.FM (listen to the complete interview)