I am a plastic owl. Today is the day I jump.

The Hendersons perched me ten years ago on their asbestos roof, which overlooks Route 1A North, the highway from downtown "Bahston" toward "Ra-vere Guy," as beer belly Bob next door typically squawks while raking his lawn or "shov-lin" his "good-fa-nothin' driveway." "Damn massholes, all drivin' with their Dunkin' Donut's reg-ya-lahs from Bahston to Ra-vere, guy—hey, hand me anotha Bud, guy," he'll grumble to his still-livin-at-home adult son. Bob sits sometimes on a rusted lawn chair, day-dreaming the daylight away, sipping his Buds, and pulling his knit cap lower over his fuzzy earholes. I've heard him whimper a love song to himself, something I think the passing radios say is by a Mr. or a Sir Elton John: What have I got to do to make you love me? What have I got to do to make you care? So go the lyrics. Clearly a wish has long been crushed for Old Bob. I don't want to end up like him. Alone. And yet, alas, I must.

I'm supposed to scare off the pigeons, but those winged rats have become more aggressive. Apparently, the jig is up: I'm sure they know by now, I have no heart and am literally hollow inside. They've been a'circlin' me lately; one even pecked my chest yesterday. The ping ping ding gave me away.

So today is the day I make a break for it. I'm going to fly/fall off this roof and get carried away in this Nor'easter wind. My best friend, the copper mermaid weathervane, Cecilia, says a wild blizzard is coming our way. She's been spinning dizzy now for about a half-an-hour. The last time this happened, my molded, painted feet claws froze solid, expanded in invading ice, and cracked. I haven't had a day's rest since from the hot prickle in my toes.

Life used to be rather peaceful up here. I'd spend my days, squat in a sentry's pose, fending off flying rodents just simply by me being me. They'd sit and shit all day on Bob's roof, eyeing me frightfully from their safe height there, white trails raining from under them, staining the top-most shingles as though icing on a hot cupcake—their buttercream waste melting from the heat and dripping unevenly over the edge. I'd be stoic, with curled beak, disdainful of those lower birds, and proud of my clean roof.

As I said, life was peaceful, the predictable occupational doldrums, which I didn't recognize as malaise until the day Cecilia showed up and tilted my world to a constant jumble. She may as well have unhinged my skull and thrown Pop Rocks and Coke inside—what with the forever frothing confusion she's caused.

How does he know about Pop Rocks and Coke, he's just a fake owl, you ask? Well, my friend, the smog within which I live is a potluck of knowledge. Folks stalled in the incessant traffic keep their radios blaring, the Henderson boy, who they shoved in the attic bedroom once he hit puberty, keeps his television on all night, and Bob, well Bob talks all the time, whether to himself, the neighbors over the fence, his son, his own hat, hell, even me, as though I am his almighty confessor, aloft up here and over his head. And Cecilia, she reports not only of the West, East, South, and North winds, but also of the stories she divines from her higher placement beside vibrating electrical wires and her fingertip reach to the clouds. Some of her tales are no more meaningful than an observation of across-the-street roommates fighting over unwelcome pets, but to me, her words and her eyes, which hold the universe, give away the meaning of life.

Enough! I can't allow myself to think of her now. Today I must be strong. I must move on. The wind is gaining strength, and I must make my escape. This is my chance to leave of my own accord. Cecilia shouts trailing words to me at her every revolution. I can't hear a full sentence from the howling that drowns the beginning and ending of her sea-woman's lovely trill. I'm going to miss her, my Cecilia. Frankly, as you may have gathered and between you and me, I'm in-love with her.

How, you say? I know, I know. I have no heart. Right. True, true. Also, I'm a pre-fabricated owl and she a gleaming mermaid, a meaningful weatherwoman. I can't explain it, really. But there's this warmth I get in the cavern behind my gray-painted breast-feathers whenever she sing-songs my name. "Owwwwwl," she says, as if I am her haunting word.

The four nails that once bolted me solid to the roof-line have dwindled to one rusted stub. The other three were loosened through so many storms, so much rocking wind. Not one Henderson has been up here to check my placement or health since the day they plunked me down. Only once did I see one of them up close again: two years ago, the old man emerged with beautiful Cecilia, and I chose to believe she was his personal gift to me for a job well done.

I think I've earned my keep here; I'd like to believe I'm worthy of Cecilia. I'm definitely not worthy though. No, she, she, well, she is shining perfection. Her eyes, although copper like the rest of her, are so liquid, all I see is the blue of soul-stealing pupils. Her hair, to me, is a wavy black. Her skin, a tanned brown. I see too a freckle on her chest and one on her left hand; they temp me to a maddening distraction. Her scales I envision a blue-green with a tinge of rainbow at the sharp points of her floating fins. Her voice is as though an angel is singing the loveliest opera, even if she is only reciting the weather, about which she is never wrong. Her mind is ablaze with knowledge—indeed, only she may predict the force of wind. Only she can warn when Bob's son will bring his BB gun practice to my head, once again. However ominous, she calls her foreboding in a soprano poetry, all the same: "Owwwwwlllll, my Owwwwllllllll, he's coming, he's coming, his gun, he holds, his gun, he holds. Twist, twist, be sideways, my Owwwwlllll, his aim, you will, thus foul."

My Shakespearean, weather-reporting love-maid, my fantasy, for how could an empty mold like me ever deserve her affection. Never. I am nothing. Truly, nothing. 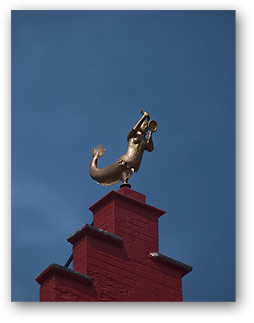 I might have lived the rest of my days thinking my hard work was well done and I had no worldly expectations to think on, or rather, to plague me. Not one speck of pigeon poop has sullied these asphalt tiles in all these years. I'm sure the Hendersons inspect my work whenever they drive home on that congested roadway, my only view, but for the Panda Express billboard they installed a year ago. That too, like me, has been left to fade in the sun. The chain-smoking paper pasters who spent three days rolling the panda out haven't returned, even though it's been three months since the hoodie-wearing writers spray-painted an "S" in front of Express, so the message now reads, "Panda SExpress." Cecilia and I laugh over iterations of literary panda paw-knocking, quick horizontal mambo on the eucalyptus highway—speeding panda love. And oh, her laugh, it feeds me for days. Was I ever even full before her laugh?

Lately, until yesterday, I tricked myself into thinking Cecilia might unbolt herself, swim along the pinnacle of this apex, and kiss my cold, dead cheek. This wishful dream, however unrealistic, gave me hope in my impossible situation and made the sun seem less like an ever-rising, ever-falling, ever-rising prison warden. The hope of her scared the life into me, life I previously didn't know I was missing.

But everything changed yesterday; yesterday, I became truly fearful, for after that dirty rat bird pecked me, he crouched, like a dog about to pinch, but then flew off when a semi blew his horn. This is why I have to flee. I simply cannot fail in front of Cecilia.

What else did she say? If I were more than a shell, I might ache not knowing. I might swallow a stone to lay upon my missing heart at the thought of following her advice and leaving her. I will never laugh with you again, my love. I will never listen to the whistle in your voice when you whisper of the coming thunderheads. I will never fall, deadened in the chimney smoke, hazed-out, hypnotized by the way you sometimes look at me. I will miss you, I'd probably think as I jump—if, that is, I had the capacity to feel anything beyond the whooshing cold through my cracked toes.

I am a sudden tumble within the washing wind. I'm not sure when I am right side up, wrong side down, slip sideways, or thrust forward. If I wasn't scared out of my phony feathers, I'm sure the ride would be a blast—a full-scale arctic blast.

A year has ticked by, and life is so much better here in the bush. An evergreen cover protects from the constant Massachusetts snow or rain or beating sun, depending on the season. A discarded, coiled garden hose serves as a bed.

Best of all the best, Cecilia jumped too. She lost her directional entrapment, so only her metal body graces our rubber bed. Her copper hair flows by my side.

About two months ago, someone from Route 1A North threw a frizzy lime-haired troll doll from a passing car—and I never thought I could love anything more than Cecilia. She landed face-down on Cecilia's torso, where she's stayed. Even though her synthetic, stringy hair tickles Cecilia's lips, we love our bundle of absolute joy beyond the highest steel bar holding Panda SExpress, beyond the clouds above even that, and beyond the sun, who was once my warden. We've named our child, BB.

Cecelia and I are so very much in-love. On that fateful day when she landed by my side, the first thing she said was, "Owwwwwwllllll, I've been trying to tell you, my love, I love you. I couldn't let you jump without me. I couldn't live even one hour without seeing your round, round eyes."

At the very moment she said this and I discovered that my longing was reciprocated, I forgot every second of terror I'd been living under since she'd arrived two years before. It was as though the sickness I had never existed, no moment was ever without her, no past had ever been dark. I do not understand this power Cecilia has, to so instantly transform my life in a way to rewrite my own history. So too, her affirmation of love was as though the feeling were obvious—and stating so, she magically moved the prickle in my toes to this thing now beating in my chest.